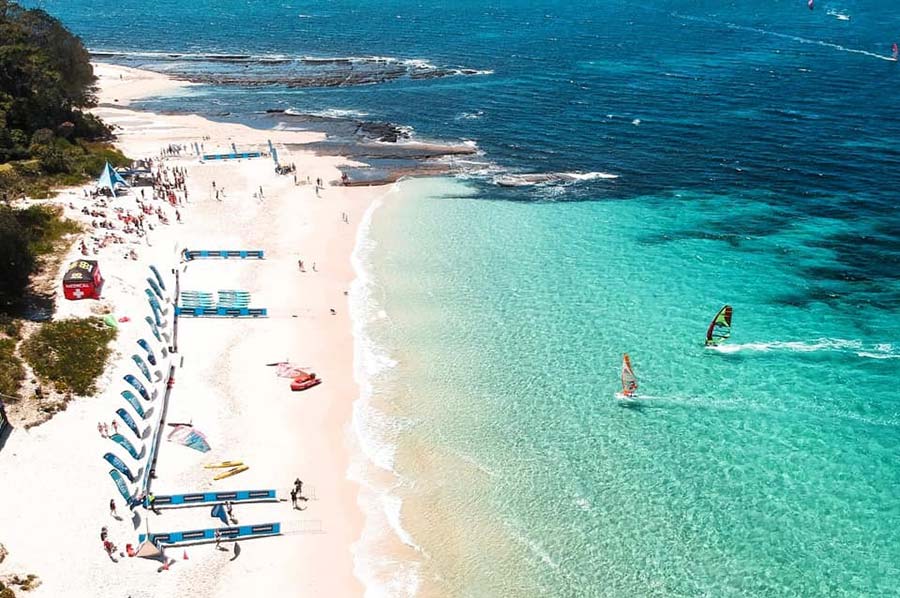 The South Coast of NSW comes alive in October when Jervis Bay plays host to Australia’s largest multisport Sand and Sea Festival. Just 2.5 hours south of Sydney, this inaugural festival brings together competition, recreation, clinics and exhibitors showcasing stand-up paddle, windsurfing, kite surfing, ocean paddling and much more. Ty Judson made it to Jervis Bay and successfully fought for the title. Read his report below:

To compete for ‘King of the Bay’, 3 race series were held where a combined score made the overall score. The competition opened with the  8km flat water paddle ‘Up the Creek’. As starting signal sounded, only around 500m into the race a pod of dolphins swam by, which is not something you would see every race.

It was fun racing against the other paddlers and leading the draft pack for most of the way, but it also made for a serious challenge. With some strong currents at the inlet to the creek, my main challenge was to stay on the board. Once we headed back to the beach we all took our own route towards the finish line.

The ‘Bay to Beach’ was a downwinder that saw us paddling 12km in the North-eastern wind that had built up to around 15knots over the few hours between events. We first had to paddle 2km upwind before making a straight line back down to the finish.

Some of the boys got off to a quick start, but I made a move at around the 1km mark and was first to the bumps. Being ahead, all I had to do was hold off the rest of the skilled paddlers in the downwind. Paddling in the bay is pretty special, the large opening at the heads allow swell to make its way in. At about the halfway mark this became very apparent as you were linking larger bumps right onto the beach.

It was so great to watch so many paddlers having a great time in unreal conditions.

As the next day came around so did the Southerly Buster (editor: local wind), we had 15-20kts of wind. The racing directors decided to vote on the next race; “do we paddle upwind and then back down” (original), or “do a double downwinder” – like the first choice ever had a chance.

The first 4km of the double lap started at a high pace with no rest. Everyone racing was on fire, and anyone thinking that the pace would drop over the 2nd lap was very wrong, as everyone turned it up a notch!

All in all, these were some great days away, with so many competitors that had smiles on their faces the whole weekend. Thanks to everyone who made the weekend possible and I am more than elated to come away with the ‘King of the Bay’ title.

Now it’s time to get ready for the Australian titles in a couple of weeks.

Read more about the Carolina here, or check out a beach start in drone-o-matic below: