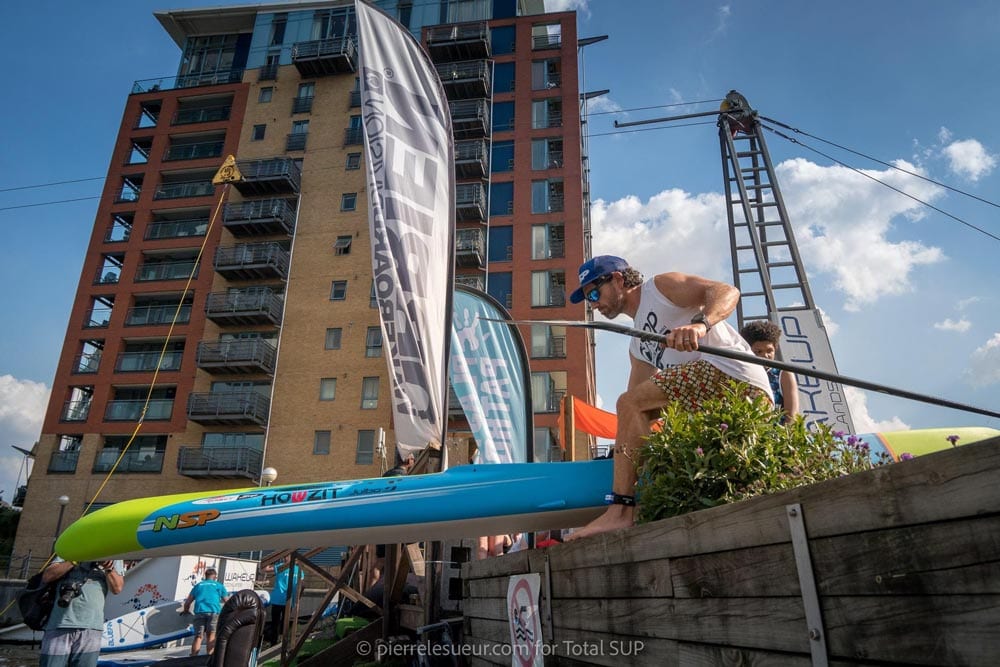 Travis Grant is an elite NSP paddle athlete, holding several world titles under his belt, including Molokai, the Carolina Cup, King of the Harbour NZ and countless others. Travis contributed on several articles on this website like:

Last weekend, Travis attended the first stop of the APP world tour, which you may know as the rebranded Waterman League:

TRAVIS:
“First stop on this year’s new APP world tour was London and boy did London deliver. The weather was an uncharacteristic 30 degree’s Celsius (86 Fahrenheit for you imperial Americans out there), and while that is warm for some, it turned out to be very hot for others. Me, I never thought I’d be trying to avoid the sun while in London.”

The venue – Day 1
“So the event set up at the Royal Docks was very neat. Even the water there is clean. Well, clean enough anyway to fall in if you had to.

So I was there for the main events – the pro races.  All in all there were three races, with the biggest one being the exhibition/invitation only river Thames race. This was to be the first race ever allowed on the river Thames and most certainly the highlight of the event for the elite paddlers.

So the organization loaded all our boards up a truck and all the paddlers in a bus after a nice breakfast and off we set for the middle of London and the river Thames. This was to be the first event of three in total, and while it only was a 4km exhibition race, everyone was amped and ready to take things very seriously.

For me personally, I like my racing to be more of an adventure, with the Carolina Cup being a prime example, with the rounding of an island, and at Molokai you cross over to another island (big adventure!). The river Thames is not as rough, but it’s certainly an adventure heading for Westminster Abbey and the London Eye.

Thames is renowned for a strong current and some considerable tide, but since we started on the high tide, things were very slack as we like to say. It was pretty neat going under all the busy bridges and in and out of the docks while winding our way to the London Eye, which you could see after you came around the final corner in the river.“

“I spoke to several other riders and even though it was a short race everyone loved it. The outlook for next year is that the organization will be allowed to double up and lengthen this race in particular and make it more of a feature of the London SUP Open. Either way, paddling down the Thames is an experience itself.

I finished 2nd in the exhibition event and felt very happy with my performance. I paddled the NSP Ninja which for flat water races is the board of choice no questions. I certainly felt like I had an advantage and appreciated the NSP Ninja I used for the weekend.”

“After the finish, the marshalls loaded us back up and drove us through London, Over the famous London Bridge and back to the Docks.  The Football (Soccer) England vs Sweden was on that day also, so London was alive with football fever. It’s neat to be in England when they are playing, and even better when they win, which they did.

After the England Quarterfinal win, we had our next event: the (very) short sprint races.

I didn’t do very well in the sprints. It’s something I personally need to work on and practice.  Not sure where I finished but I felt I didn’t get past my personal quarter-finals – Oh well… So that was day 1, two fun SUP events in sunny England and a great soccer game to boot.

Technical distance race – Day 2
“The technical distance race was to be held in the Royal Docks. It wasn’t anywhere near as fun or adventurous as the River Thames race. But it was still a race. Eleven kilometres, 3 big laps and one super lap (basically a short lap you can do at any time during the race); it was a new element to make the course more exciting.

I had a bad start in the distance race. I wasn’t really into it, but as the race progressed I got into the mood and decided to give it a proper go. So I pretty much paddled the whole race out in front of the second pack. Micheal Booth and Connor Baxter broke away early and I was caught napping and missed their breaking away. So I spent most of the race – in fact, all of the race with my own challenge of seeing whether I could reel them in or not.”

“It was kinda fun chasing them but in the end Micheal broke free of Connor and walked away to an easy victory and I managed to pull up even with Connor on the last turn and sprint home for what I thought was going to be another 2nd place finish. But alas, it wasn’t to be.  A fast-finishing Arthur Arutkin passed me on the line.”

(Note editor: That moment can be seen in the video at the 1-minute mark)

“I paddled strong, felt fast and I was pretty happy with my performance. Again, I used the 2018 NSP Ninja and it felt unreal. I paddled the whole race on my own or out in front dragging the whole field along with me. The board is so efficient when it is in clean water and I held a very high average pace for the 11km race.

I’d like to tell London and APP that they’ve hosted a great event and even though flat water races are not exactly my favourite, I really did enjoy this event.”

“Next stop for the APP is New York but for me, it is going to be Molokai (July), the exact opposite of flat water, whahaha! Then after that, I will compete at Hood River in August which is a big downwind race and then I will race on the Hudson in New York in September. That should be more of a flatware race, and hopefully an exciting Beach race too.

So if you’re reading this and enjoy the great sport of stand up paddling boarding.

Wish me luck and keep following the action. If you have any questions or want some training advice and programs you can join me on Paddle monster and I can share my personal training programs with you and/or answer your sup questions: www.paddlemonster.com.”

Full results from both Men’s and Women’s Divisions from this weekend’s London SUP Open, stop #1 on the 2018 APP World Tour, courtesy of APP.